The Astrological reasons behind the death of George Michael

The Astrological reasons behind the death of George Michael

Yesterday for Christmas we lost George Michael. This deeply shocked me and I decided to analyze the cause of the tragedy. It might not be particularly useful, but astrologically will teach us something.

Here is his natal chart with the sidereal fixed Babylonian zodiac. 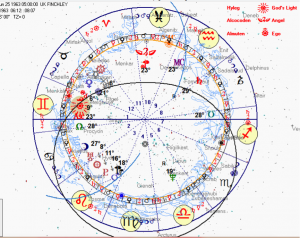 A brief analysis of the natal chart

Beautiful chart of a handsome, successful and talented man blessed by Jupiter, which is strong and in hays. Venus and Mercury are almost conjunct with the fixed star of luck and money Aldebaran and gave him the talent, luck, but being in 12th house are the possible cause for his homosexuality. Sirius on the line of the Ascendant gave George visibility, spirituality and success. The meridian passes through some of the sacred degrees of Hermes and certainly gave him a deep spirituality and indicated his special mission on Earth.

Saturn is in hays, but is retrograde in the 8th house and in opposition to the waxing moon. This is a risky configuration. This aspect is activated this year and especially this month when George was gone. Here is a detailed explanation.

This is a map at the time of death.

Here I explained how to work with the profections.

The profected ascendant for this year of the native is Scorpio. This is pretty hard, because at the moment the invisible and very negative Saturn is there and at the day of death the Moon activated him. Saturn in the natal chart is in 8th house and is retrograde. We should not forget that. This in itself is not enough to expect that someone will pass away, but indicates a problem.

In primary directions, errors do not happen, especially if the time of birth is accurate to the minute. Here’s how they look around the time of death.

In September zodiacal direction of Neptune is active at the IC.

In October, again on the lower meridian Neptune stands in parallel with Pluto.

In December, shortly before the death, Pluto is direct at the ascendant in parallel to the Sun of the native.

I do not like this. Pluto is filled with dark mystery. In the natal chart he comes from the 3 house and is conjunct with Mars, which manages the profected ascendant and the 6 house. Mars and Pluto are in Leo, whose ruler the Sun is in the rising sign. The Sun signifies the native himself and his super-consciousness and is injured by the primary direction of Pluto, which comes from the Sun sign Leo.

Mars rules 6th house and is a possible sign of disease reinforced by Pluto. The disease is associated with the sexuality of the native, for, the sixth house is ruled by Mars and Neptune who is in the 5th of the love life of the native is also activated through primary directions.

The 3rd house where Pluto and Mars rule is of media and communications, and I suppose they have played a very tragic role and weakened emotionally George Michael’s spirit.

My conclusion is that there is no external interference in the tragic death of George Michael. I expected signs of Illuminaty ritual murder, but they are not available. The reason why he passed away is a disease and it is visible in his horoscope.

certified astrologer from the academy of Robert Zoller in London