What is Ancient Astrology

What is Ancient Astrology

The applications of astrology are many, but the most important ones are its power to describe people’s character, personality, provide understanding of person’s life and the reasons behind certain events, prognosticate others, describe, and interpret one’s fate.

For this purpose we use the methods and the elements of the ancient astrology that were practiced in Mesopotamia from 5,500 BC to 70 AD and which, according to the tradition, are coming directly from the illumination of the first Hermes- King Enmeduranki who was a Saint from the pre-diluvial city Sippar in 5,500 BC (Rumen Kolev, Ancient Astrology, 2013).

In the various personal astrological analyses we use the Fixed Babylonian Zodiac, (where the fixed star Aldebaran is in the 15th degree of Taurus) and as re-created and registered by the third Hermes, from around 770 BC, with its 12 images, stars and exact borders. The above is applied in the reliable computer program Placidus 7 of R. Kolev, which we use for the purposes of the astrological interpretations and predictions.

The interpretive and predictive technics of the ancient astrology are very specific, knowledge-based and most of them are forgotten for the modern astrology.

The following are the main methods of the ancient astrology that are not known to the modern astrology:

Two are the main techniques used by the modern astrologer that are also well known to the ancient astrologist:

The interpretation of the modern astrology heavily relies on the intuition of the astrologist and his abilities to make description of the psychological profiles of the person or the event.

To illustrate how the ancient Mesopotamian astrology works, we are applying the natal chart of John F. Kennedy:

Interpretation of the Natal Chart 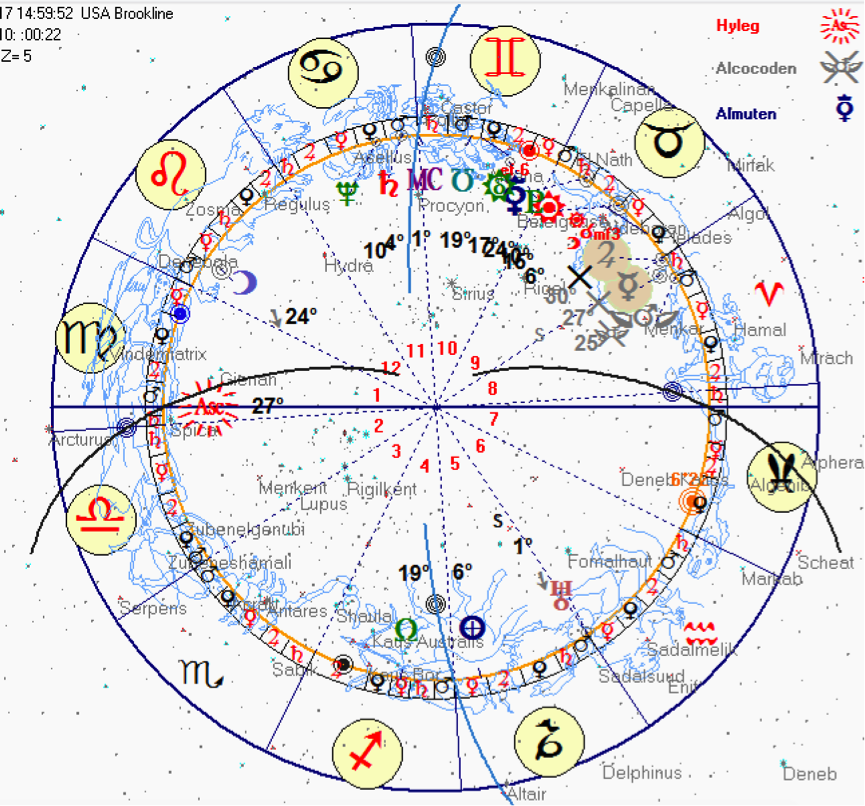 This is an astrological interpretation of the birth chart of J.F. Kennedy based on some of the Mesopotamian technics explained above. Most of the conclusions are in agreement or direct quotations from the analyses and interpretations of aspects or other configurations of natal charts made by ancient astrologists like Al Biruni (1029 AD), Firmicus Maternus about (400-500 AD), Regiomontanus (1300 AD), Vettius Valens (328-378 AD), R.Kolev (contemporary author astrologist).

This analysis will include 1. My astrological reasoning: not in bold. 2.

The rising sign (ascendant) is in the 27th degree of Virgo in a term of Mars and Venus as almuten of the horoscope.

The aspect of Saturn to the rising sign will be left and according to the ‘secret doctrine of Hermes’[1], the person will carry the characteristic of the animal that the planet “gives” to the ascendant through the aspect. So, the left aspect of Saturn means a bull: this person will have the most dominating features of this animal.

1 According to the “secret doctrine of Hermes Trismegist” (lecture Rumen Kolev 2015 Varna), all seven planets give seven rulers/lords of destiny. They surround each planet on six sides. Four of them are incarnated on the Еarth as animals, plants, stones, and three very fine and lofty spirits, which have no equivalent on our planet. Those that are incarnated on Earth and have equivalents as animal spirits dominate people’s characters and appearance depending on the aspects they draw to the ascendent.

The fixed Star Spica is on the 30th degree of Virgo, just below the ascendant and stands there for luck. It’s Mercury and Venus (posited together) character gives people their characteristics.

Venus as an Evening Star (visible at night) is born in Kennedy’s horoscope seven days before his birth and in the 15th degrees of Taurus- where his Sun and Aldebaran (the star of the Kings that gives luck, fame, money), are in perfect conjunction (together in the same degree and sign). Venus as an Evening Star responds to the Greek Aphrodite, the Goddess of love, beauty, pleasure, and procreation. Moreover, Venus is right between the horns of the Taurus and in own sign (Taurus). Venus, as a symbol of love in the horns is a sign of extraordinary sexuality of a man. This is reconfirmed by the position (trine his ascendent) and the qualities of his Venus towards his ascendent.

According to Valens, the term (Mars of the sign Virgo) describes people’s personality as outlined below.

The dominating features as a result of the aspects above denote masculinity, extraordinary sexuality, representation of physical strength and power, and unpredictable behavior (as represented through the animal (bull) found as portraying important features of the personality of the Native in this horoscope). The rising term adds to this the “wandering at night”, and popular (V. Valens, Al Biruni).

The fixed star Spica at the ascendent, describes “people that enhance men with a pleasing charm, and they make the sort of persons that very easily everything they desire, but a desirous inclination of mind impels to association with many women. They also denote the ornaments of learned speech, shaped by education that always seduces the ears of their audience with the pleasing charm.” (M. Firmicus)

Mars in conjunction with Jupiter and Mercury, both “burned from the rays of the Sun”- invisible (When a planet is invisible it won’t provide the person with it’s good fortunes as according to the legend, it goes to the Underworld). Mars and Mercury together in the 8th house (own sign) also describe a person that is irreligious and unspiritual.

Saturn, a bad planet, only in three degrees distance from the meridian denotes misfortunates and solely positioned in the 11th house (the house of friends, dreams, and also children together with the 10th and the 5th).

Jupiter as the most important significators of the children in one’s horoscope should be examined thorouly. Here, he is invisible (burned from the rays of the sun) in the 8th house (destroys fortune) conjoined with the above-mentioned planets and in a square with Saturn. This gives possible problems with children. This is reconfirmed with the position of Saturn (11th house- also house of the children along with the 10th and the 5th; see further).

In sum, this configurations can deny children.

It (Saturn’s position) also gives rank to the Native that his father established before him.

Spica just below the ascendant and Pollux (Pollux and Castor are the two twins of the Gemini constellation) close to the MC (meridian), tell a destiny of a leader.

The Sun is exact conjunction (planets or/and stars are in the same sign, degree) with Aldebaran (the star of the Kings that gives luck, fame, money), in the same degree.

Mars, Jupiter and Mercury in conjunction, in the same sign of Mars denote important position with the greatest power of authority.

They will denote good marriage in young age.

Moon square Venus (in the exact degree), if Venus is superior, increases the fortune, gives great advantages, gives pure and honest love of their wives for them, full advantages of joy and the grace of pleasant speech with the greatest good fortune. Nevertheless, these same persons desire sexual relations with others, driven by an inpatient desire (M. Firmicus).

Brothers and sisters and short travels are in the 3rd house. It is in a fertile sign- Scorpio. The ruler of Scorpio is Mars who is also a male sign. The native will have only brothers or more brother than sisters. Three are the planets that from there aspect (trine) the lot of brothers in the 12th house- the 26th degree of Leo in aspect with the Moon in J.F.Kennedy’s chart (calculation of the place of brothers according to Regiomontanus’s calculation of the Arabic lots of brothers: see R. Kolev 2013). Two of them are invisible (Mercury and Jupiter are burned from the rays of the Sun, see above), and this prevents them from giving their good fortunes.

This indicates problems with two of the brothers.

The 6th house is about diseases, slaves, animals…The ruler of this house in this horoscope is Saturn. The lot of diseases is in the 8th degree in Cancer and in conjunction with Saturn and makes square to the ascendant and receives a square from Mars.

In this sense the Native will not remain without diseases. Saturn indicates diseases of the right ear, anxiety, bones, milt, different chronic pains, rheumatism and many others caused by cold (Firmicus, Mathesis). These diseases can occur suddenly due to the bad aspect of Mars.

Mars (night planet, bad in diurnal nativity), in the 8th house (represents death, sexuality, occultism, inharitages, etc.). Also, Saturn square Jupiter, when Saturn is superior denote danger to the Native’s life. This is reconfirmed from the Moon that separates from Venus and moves towards Mars denotes.

These make persons involved in dangers, to be in public and prominent actions, but nevertheless it denotes violent and sudden death (see Mathesis: M. Firmicus).

The Moon signifies the complete human being, its emotions, and mental and physical health. In a horoscope of such man of power, the Moon can describe the nation, the people. Therefore, the courses of the Moon ought to be examined with precision. In Kennedy’s chart his Moon is waxing, which is a positive characteristic, as it gives day qualities to the Moon that is in harmony with the diurnal horoscope). Still, even though the native will be well accepted from the people, this can give very powerful enemies, and he can become a victim of different deceptions, also have unstable health.

Conclusions based on the online biography of J.F.Kennedy :

Kennedy was described as a ‘compulsive womanizer’ by biographer Robert Dallek: “John F. Kennedy’s penchant for glamorous women has now become as legendary as his politics. 51 years after his assassination, we still can’t stop talking about Kennedy’s enduring sex appeal and his many suggested conquests.”

According to one of his aides, the decisive factor in Kennedy’s victory as in the presidents elections was his personality: “He was the new kind of political figure that people were looking for that year, dignified and gentlemanly and well-educated and intelligent, without the air of superior condescension.” In 1957 he won a Pulitcer Prize for biography. These are the direct implication of the astrological interpretation of the personality and character described above that describe an educated person with excellent oratorical talents.

About his spiritual or religious inclinations, we could not find evidence in his online biography.

It is known that Patrick J. Kennedy (the father) served in the Massachusetts Senate. This is evident in the description of Rank.

Kennedy’s wife lost a child after birth and suffered a misscariage and a stillbirth.

Jacqueline Kennedy wrote in a letter to an Irish priest, that she loved her husband, and loved him passionately; it would appear, for all the talk of her and her sister, Lee, being girls on the social make. It is a passion that calls out across decades: “I am so bitter against God,” confesses this lifelong Catholic, in early 1964. “I feel more cruelly every day what I have lost – I always would have rather lost my life than lost Jack,” she wrote in another letter.

In these same letters, Jacqueline reviewed that she knew about her husband’s affairs.

It is known that Joseph Kennedy died in his thirties in a secret mission in Vietnam and Robert was assassinated in his early forties.

At the U.S. Navy Kennedy and was assigned to command a patrol torpedo boat in the South Pacific. On August 2, 1943, his boat, PT-109, was rammed by a Japanese warship and split in two. Two sailors died and Kennedy badly injured his back.

All his life Kennedy continued to suffer frequent illnesses during his career in the Senate.

The President J.F. Kennedy was assasinated in November 22, 1963.

1 According to the “secret doctrine of Hermes Trismegist” (lecture Rumen Kolev 2015 Varna), all seven planets give seven rulers/lords of destiny. They surround each planet on six sides. Four of them are incarnated on the Еarth as animals, plants, stones, and three very fine and lofty spirits, which have no equivalent on our planet. Those that are incarnated on Earth and have equivalents as animal spirits dominate people’s characters and appearance depending on the aspects they draw to the ascendent.