The competition. The race against each other. Ancient astrology

The competition. The race against each other. Ancient astrology 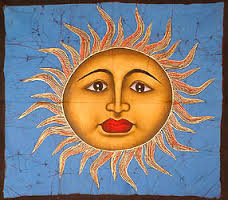 Not long ago I wrote about the free will of man and how it is expressed in the horoscope.

This article is a continuation of the article about the free will, which proved that the fate of each one of us is encoded in the horoscope and the freedom consists in how we perceive and react to life’s lessons. Would these lessons take us on the spiritual path, or would we take the wrong paths and choices that are always the easier ones.

In this connection another very important theme comes along- for the competition among people, for the competitive spirit that occurs when competing for jobs, benefits, and the careerism that burns our bowels.

Does it make sense at all to compete, to divide, or to strive for what is given to us, according to our qualities and complex karmic lessons that we cannot avoid? The lessons we extract lie exactly there- how the everyday life flows, how we sort it or not. How we perceive the reality? Here is the free will.

We talked about fate.

Everyone has a strictly defined destiny, given to him/her by God and that only God can amend on the basis of our thinking and energetic vibrational divine evolution. Only God can decide extremely rarely to alter or ease a destiny only as a result of very special merits.

Slava Sevrukova, Bulgarian medium said that we can change the events, but fate- not.

This again brings us back to my article on the free will of man in astrology.Everything is predetermined.In practice we have no free will.

What does this mean?

Does it make sense to fight and compete for some social benefits?Isn’t it destined for everyone what he/she will have during our short visit on Earth?

What and how much exactly each one of us will obtain during this incarnation is predefined, it is destined. What is mine can never be yours and the opposite. All struggles, battles and darts are absolutely desolate. Yet, this competitive behavior has consequences and they are always karmic. Always. Nothing remains unnoticed in the universe.

I will prove it to you.

Recall the noisiest race for this and last years. The presidential competition between Donald Trump and Hillary Clinton. Perhaps only for us, for our naïve eyes, they fought fiercely for the presidential post. Did it make sense to do it at all, given that in the horoscopes it was more than obvious that he would win? It is another story, why the whole show was played in front of us?

My attempt is to assure you that there is no sense of competition and race between us, because without pointless struggle we will get exactly what God has ordained for each of us according to each one’s merits or lack of merits.

See their horoscopes, Clinton’s and Trump’s.

This is a chart of an eternal winner.Given to the native by God.For good or bad, this is not of our business.

On his meridian rises the strongest and most powerful star of the money and luck, the pearl of the Taurus-Aldebaran.Mercury is also visible in a phase and promises eternal success and glory. The Full Moon promises a rise, albeit of a variable nature. 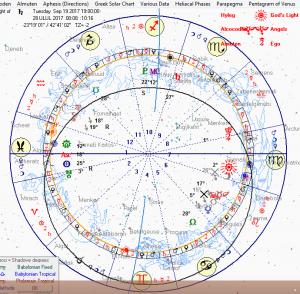 This natal chart by no means has the same power.At least, because of the angular places – ascendant, descent, upper meridian, lower meridian. There are no royal stars distributed on key positions in the chart to give strong impetus to the horoscope.

The Meridian in Leo is indeed an indication of possible royal power, but it is far from the Heart of the Lion. The conjunction between Mars, Saturn and Pluto gives rise, but through dictatorial measures. Huge benefits reach the native indeed, but through marriage.

Well, when you saw the two horoscopes, was it not clear that the man with a royal star of luck and money-the Taurus pearl will win the election? Exactly as I had predicted here.

Why did they then compete?I have no answer, and in this case we are not looking for the conspiracy that we all know about.

Another thing I’m trying to put an emphasize on – after everything is destined and known what you, what I will get from the universe – why then do we compete and fight for some good?

There is absolutely no point in that.There is, however harm and there are consequences.

Indeed, we should not be inert.We should not be passive and wait on God’s will. We must also not fight with each other for work, for clients, for public goods.If it is decided, it will come with ease, according to our merits or lack of merits.

With cruel and unfair struggle against each other, we are incapacitating bad karma.

God has given everyone according to his ability and the strength to endure.Free will consists of how we treat others, what emotions we experience and how we learn lessons.

Good people and good students of the universe help each other, rather than compete and fight against each other. Their fates then will surely be relieved only due to their good intentions and accompanying actions.