As seen from Amsterdam 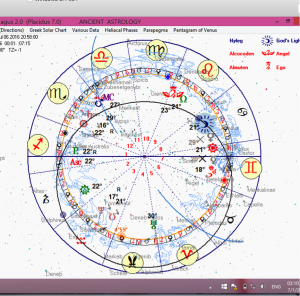 This report is made using the sidereal Babylonian zodiac, as used 5000 years BC in ancient Mesopotamia, depicting the real situation on the sky, and not the tropical zodiac that is used by almost all contemporary astrologers and does not show the astrological reality.

When starting such monthly review, we should take into consideration a very important ancient rule of Mesopotamia valid also nowadays: the beginning of every cycle is determining and characterizing the complete cycle. This means that we should look very carefully at the planetary configurations at the beginning of the cycle in order to predict how globally and financially the year or the month will look like.

Therefore, let us take a look at the astrological New Year. This will be the time of the first Moon crescent around the date of the vernal equinox on the 20th of March each year, or, as known in ancient Mesopotamia, the First Nisan. On 8th to 9th of March, the full Solar eclipse took place. This is a very serious and negative aspect of great importance that will resonate through the whole year 2016. It was a part of a trigon between Saturn and Jupiter. This would say that starting from March until 6 or more months after that, very important critical conflict situations will take place as well as tension in terms of human moral values, religion, spiritual beliefs, and in the political life. The Solar eclipse can bring seismologic activities in the areas where it was witnessed with an unarmed eye. Luckily, in Europe we haven’t witnessed it’s shadows but its negative influence on our daily life will be and is being experienced.

However, the existence of a solar eclipse near the date of the first Moon crescent around the date of the vernal equinox of 2016 is a sign to expect a very difficult year in terms of international conflicts, political tension and work of the national secret services that will be harmful and not in the interest of the common citizen. In two words, such astronomical event would be considered an omen in the ancient world. Seems that they made the right interpretation!

This for certain will have an impact on the global and financial markets. This analysis will be a subject of a closer look as seen from Amsterdam as a starting point, which we have chosen due to the European importance of the city, both because of it’s location and influence.

The time of the first Moon crescent for July will be our starting point and orientation on how the month will look like.

Above is the sidereal chart of July. The retrograde (moves backwards) Pluto on the ascendant is an indication of secretive governmental actions that will be dominating this month.

Mars on the meridian (MC, the highest point in the horoscope), stationary (does not move) is a bad indication of instability, conflicts, violence outbreak and danger of terrorism. The stationary planet would mean that no actions will be taken from the government to make any positive changes and also that there are no solutions found for the resolving of the crisis.

Venus is invisible and in conjunction with the fixed Martian star Polux confirms that there is a danger of conflicts and revolts of all kinds, but is also an indication of the lack of cash money on local but also European level.

Mercury is invisible and too close to the Sun and is there to indicate that nothing new will be created and made up in the best interest of the people, but also no trade, no fair business will take place and also, taking into consideration the dominating effect of the stationary Mars, a possible market volatility (unpredictability) will be present.

The position and the phase of Mercury are also not creating good environment for successful business trips and negotiations. The opposition of Pluto to Mercury, the Sun and the syzygy (the point that indicates the position and important of one in society) in the 7th house is an indication of badly and secretly planned negotiations, transactions and deals by the ruling class. Due to the opposition of the retrograde Pluto they will remain secretive and harmful for the people. However, the nation, the people will remain in a “comfort zone”, protected and isolated, as seen from the confortable position of the Moon in Cancer in the 8th house. This is also to say, that the people will not do much to gain their freedom and stand up against the governments.

The fixed star Sirius on the descendent is there to lighten up the importance and the significance of the deeds of the governing class. In addition, the Sun who represents the governors is also endangered by the retrograde Pluto, and means that an important ruler might loose his powers and position and get in trouble of any kind.

The Sun is in a term of Mars, which stands for possible conflicts between the world leaders.

Saturn retrograde in the 12th house ruled by Pluto is describing the refugees and the poor and lowest classes of the people. They will be the ones to suffer the most from the created situation of conflicts and instabilities. Pluto at the ascendant is in indication that the whole month will be signified with the presence of refugees.

Saturn is in opposition to the most important fixed star of luck and money Aldebaran, and completely destroys the ability of the star to create environment for good money making business worldwide.

All the above, emphasized by the position of Uranus in the 4th house will bring serious instabilities on the financial and the real estate markets.

A real critical time is when on 14th of July when the Moon is joining Mars. Then, until around the 2nd August, when the Moon will cross the ascendent and will be invisible is the time of danger of violence outbreaks, conflicts and terrorism. The position of the retrograde and very problematic Neptune can give a sign that airports and post offices could be in danger.

governments and foreign factors, like financial institutions, are the ones that are

ruling and manipulating the game. The conflicts and the instability are serving their financial and control agenda. They will be the ones and only to benefit from the falsely created situation.

In a conclusion, July will be a very critical month of conflicts and dangers of all kinds that will lead to instabilities and volatility on the financial market and the one of the real estates. Any business trips or negotiations will bring no or little result to the business.