This report is made using the sidereal Babylonian zodiac, as used 5000 years BC in ancient Mesopotamia, depicting the real situation and the images on the sky, and not the tropical zodiac that is used by almost all contemporary astrologers and does not show the astrological reality, but just the projection of the zodiac on the ecliptic with the difference of 24°.

The software in use is Placidus 7. 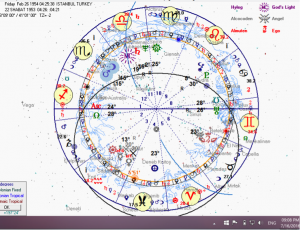 (source of the chart: astro.com)

This is only a global view at the birth chart to serve us as a base for our analysis of the political situation in Turkey.

The rising sign of Erdogan’s chart is Sagittarius with a Saturn as rising term, which describes, according to V. Vallens devious and not decent person. The position of the retrograde Saturn out of sect and in the 11th house of the people and the nation, solely describes a totalitarian profile of a person.

The waning Moon and Mars in the night chart are in exact conjunction with the king star Antares in Scorpio and the opposition of Jupiter from the 6th house give him the high rank and the very influential career of ruler and totalitarian politician, considering the Saturnine rising term and as mentioned above, the position of Saturn.

The conjunction of Mars and the Moon is taking place in the 12th house of all secretive affairs, hidden governmental institutions that work against the public welfare, to give an indication on the position and actions he is taking during his rulership. This is also a clear sign that Erdogan has very powerful enemies!

The conjunction of Mercury and Venus, both invisible and in phases with the Sun in the 3rd house, which stands for communication, ruled by Saturn, is only a sign of the manipulative and secretive methods used by the governor to enforce his rulership upon the people of Turkey. This aspect is also an indication of negotiation and oratory skills of a talented merchant and dealer.

All these is strengthened by the conjunction of the Sun with the fixed star of spirituality Fomalhaut and the very special position of Venus in the sacred 20° of Aquarius (lecture R.Kolev Varna 2015).

In a brief summary, this is the natal chart of a despotic and totalitarian leader and talented orator and merchant that is using all secretive means and personal governing talents to rule the nation.

The predisposition of the above and the planetary aspects and transits are leading to the current situation in Turkey as described and predicted below.

On 15th of July we witnessed cosmic planetary conjunction that provoked the unsuccessful coup attempt in Istanbul. The planetary aspect due to the specific position of the fixed star Antares did not suffice to make the coup succeed, but ended up dramatically for the army and the people.

Around the 28th and 29th of July additional but probably smaller sedition will take place in Turkey.

Around 11th to 15th of August the same aspect as the one that was manifested on the 15th of July will be repeated. This will exalt commotion and rebellion of a very high scale in Turkey or will cause problems of violence.

Let’s not forget the penumbrial (partial) lunar eclipse that will be witnessed on 18th to 19th of August, but will not be witnessed on the Balkans and Europe. However, such major cosmic event cannot deliver any good. This will only bring shadow to the already existing problems in Turkey and maybe prolong and agonize them.

The pick is yet to come when the transiting planets on Erdogan’s natal chart will create severe tensions for him in person and for the country as a whole. This will happen around the 25th of August and will trigger problems and instabilities in the country.

An annular solar eclipse is yet to come on the 1st of September, again not visible from our longitudes. However, this is an indication that the problems are far from ending in August 2016.

Needless to say that these instabilities in the political reality of Turkey will have a direct impact on the economy and the financial market of the country. Clearly market volatility (unpredictability) will be witnessed in the financial but also in the real estate markets.